Skip to content
Data and reports for Individuals in GymAware Cloud

Actionable data and reports for Individual athletes in GymAware Cloud

In this article, we’ll go over data collected by the GymAware RS and GymAware FLEX by GymAware Unit; outputted through GymAware Cloud. If you want to check out reports and data uses for teams, click here. In this part, the focus remains on data for Individuals in GymAware Cloud.

This provides an overview of selected exercises for individual athletes with the option of 4 parameters that are changeable depending on the coaches needs.

Being able to compare selective parameters between exercises might be able to present coaches with some insight to an athletes performance for certain exercises. For example, it’s smart to look at an athlete’s ability to produce power with a squat versus a pull. If an athlete is having trouble producing power with a deadlift, the coach might look at strengthening the posterior chain and spend more time with loads producing maximum power. Here’s an example of comparing exercises:

As you can see this graph will allow the coach to look at lower body versus upper body, which provides asymmetry possibilities between lower and upper body in regards to power or whatever parameter that you are comparing. Here’s a look at one of my own athletes: 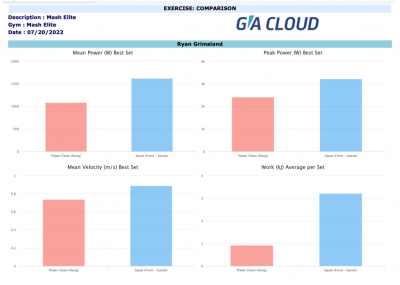 Here’s an example that might surprise some of you. Everyone thinks that the clean is the most powerful movement in the weightroom. However, when you add bands to an exercise, things can change a bit. Of course, we aren’t going as hard in terms of the competition lifts right now, so that’s a major factor as well. The point is that with data there’s no guessing or being led astray by the latest Internet guru.

There’s a couple of ways to look at this one. You can look at the load an athlete is using with a particular exercise in comparison to velocity, or you can look at the relationship between load and power. Normally, the more you lift will be inversely proportional to the velocity meaning the slower the velocity. This is how coaches use velocity to elicit a particular training adaptation. Dr. Bryan Mann is famous for graphing the qualities of strength for all of us:

I have developed on that is a bit more precise from the data collected from my own team:

This chart is the way that I prescribe all of my strength work for my athletes. This is how we never miss squats, and this is how I guarantee that my athletes are working within my intended quality of strength. Lastly, this takes into consideration outside stress and fatigue enabling me to avoid overtraining. Below is an example of one of my own athletes, Ryan Grimsland: 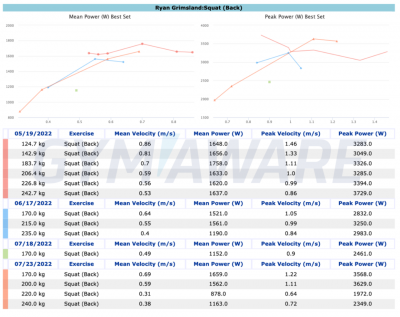 This chart shows you the relationship between load, velocity, and power. This will help you understand how certain loads will affect different qualities of athleticism. One thing to keep in mind is that simply displaying power in training doesn’t always increase one’s ability to produce power. It’s important to spend quality time at each end of the Force-Velocity curve.

The chart above gives the coach a complete picture of the relationship between load, velocity, and power. However, a Load-Power Profile gives the coach a direct look at the relationship between load and power. The relationship is usually a curved shape where the peak power will occur in a moderate load range. This marks the optimal load that an individual athlete can produce a maximum power output. It’s not my job to tell you how to coach, but I will take the time to suggest that each of you spend quality time on all spectrums of the Force-Velocity Curve. That means that athletes should spend time moving really fast, some reps at going really heavy, and some quality reps fully expressing power. This chart will tell you exactly where each load will place the athlete on that curve. Here’s an example: 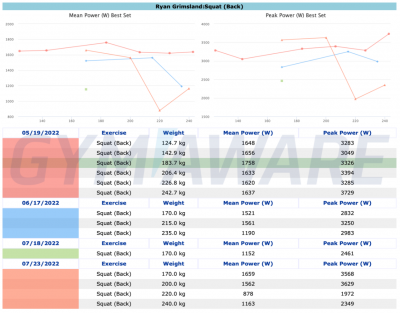 As you can see above, Ryan peaked during the May session because we were about to compete at the Junior World Championships. Now we are in an accumulation phase with on average five reps per set, so of course the velocities are down a bit. The green highlight shows us that maximum power was created with 183.7kg. What’s interesting is that his power never drops dramatically, which is why the best sport for him is Weightlifting. It’s important to know what you’re looking at to truly be able to extract maximum information. For example, in June Ryan was just starting to ramp back up, so the power wasn’t quite there yet. As we approach December, I can promise that his ability to create power at a particular load will increase because that will be the first meet qualifying Ryan for the Olympics.

At an individual and team level, this report is useful for longitudinal analysis of data. Last week we talked about team trend analysis. Now we will look at individual trend comparisons. Let’s get right into it.

This report is useful to track individual athletes longitudinally against the selected squad average. This is a great way to see if an athlete is flourishing within the environment that you have created or with the program that you developed. Let’s take a look.

With this trend report, the athlete shows an incremental increase throughout the season, you can see 2 training blocks, one with a peak in mid-March and another in May. This displays an adaptation to training with an increase in Power.

This next report compares multiple exercises performed during the selected period of time for an individual athlete. Coaches find this beneficial to track across a season of different training blocks and tapering periods. It’s also a great way to decide which movements to use in the future based on desired qualities.

Exercise comparison for each athlete:

This report tells the coach which movements produce the most or least amount of the desired parameter in this case mean power. With enough data, the coach can learn which movements need the most work for the individual. For example, if you had the data on deadlift versus a back squat, the coach could determine the amount of work to spend on the hinge versus the squat. In the above particular example, this athlete is producing quite a bit less power in the bench press versus the back squat, which is typical. However, the coach might determine that the bench press is too far behind and decide to focus on upper body a bit more.

Cohen’s D or better known as Effect Size, is a way of looking at the size or the effect of a stimulus. It’s a way of grading the exact size of the effect of a certain stimulus. The way I use it is to look at each individual day as it relates to the average and standard deviation of the prior seven days. The formula looks like this: (any individual day – the mean of the 7 days prior)/the standard deviation of the prior 7.

So what does this mean? Effect Size simply looks at each day in relation to the prior seven. Effect Size tells us if it’s a great day with an Effect Size approaching or above 2.0. It also tells us if the athlete or athletes is having a bad day with a negative Effect Size. If that negative Effect Size is close to or below -2, that athlete or athletes is having a terrible day. Those bad Effect Size days should be followed up with an off day or an active recovery day. You don’t have to be a nerd like me to be a good coach. GymAware gives you all the information that you really need. I just wanted to give you an example of what’s possible. You can do the same thing with many other statistical formulas. 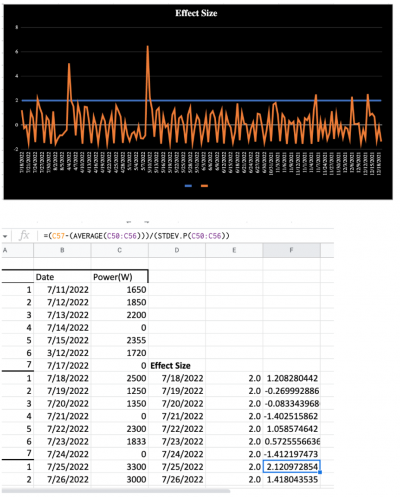 I hope this article will help all of you coaches out there with some options you have at your disposal with GymAware’s data collection that happens automatically in the cloud. GymAware makes it easy for you to make squad and/or individual decisions based on the data being collected in the background. We have entered a world of sport data analytics. It can seem scary, but with all the scientific advancements in this case GymAware, collection and discernment of data is made easy. I recommend taking a few minutes per day getting to know all the data available in the cloud. As always, please let me know if you have any questions.

Watch the video below: