Guide to the GymAware FLEX app data and implementation

In the previous topic, we dove into data in reference to the GymAware RS and the data collected on the GymAware Cloud. If you read that article or watched the video, then you know that the potential uses for data are immense for individuals and/or teams. However, what if you are a GymAware FLEX user training in your garage or in the corner of a gym? What if you are a FLEX user and coach in a box gym, which is now very typical thanks to CrossFit? There’s a lot of useful data that’s automatically tracked on every user’s FLEX app (FLEX Stronger app – available for free). In this article, we’ll focus on the below in regards to the the GymAware FLEX app data and implementation (Android and iOS):

These are two of the most important variables to track, and 90% of the coaches don’t even track those two. Of the 10% that do track these two data points, the majority do nothing with the variables, or worse, they don’t know what to do with the variables. I am not judging because a lot of you are getting amazing results just the way you are. My goal is to give you the knowledge to be even better.

With these two simple data points, a coach or athlete can look at:

Bob Takano popularized this data point in America after learning this coefficient from Carl Miller in 1974. Professor Angel Spassov also discussed the K Value during his American tour discussing the training practices of the Bulgarians.

Here’s what you need to figure the K Value:

Like I said earlier, the GymAware FLEX tracks total tonnage, but I need to dive a bit deeper on this one. Total Tonnage is found by taking the load multiplied by number or reps multiplied by the number of sets. Tonnage is tracked for all movements that are directly related to improving one’s sport or athletic performance. Most coaches track major multi-joint exercises like snatch, clean, squat, deadlift, bench press, barbell rows, etc. For Example:

What does that mean? Now we know that the athlete lifting in the above sample workout averaged 176kg/387lb per repetition lifted. Now that you understand how to find total tonnage, total repetitions, and average intensity, it’s time to show you how to use the K-Value.

Let’s say that your total tonnage for a 12-week training block is hypothetically 800,000kg and your total number of reps is 7,000. And let’s suppose you make a total of 320kg in your meet. Here’s how you figure the K Value:

Now it’s time to use the K Value to plan the next phase of training by multiplying a goal total by the K Value. If our goal is to total 330kg, you would multiply 330kg x .356 (K Value is actually a percentage so 35.6 becomes .356) equaling 117.48 rounded to 118kg. Your average intensity will need to become 118kg over your next training block to potentially total 330kg.

You could use this same process with powerlifting, athletic performance, or any other type of training in the weight room. All you have to do is identify the markers that you deem important. If you are coaching a sport that requires high velocity, power, and strength, I recommend choosing one from each of the following choices:

Strength (choose at least one from upper and one from lower body):

K-Value is the exact way that I ensure Ryan Grimsland continues to set personal records every training block. Coaches do way too much guessing in a field that already requires so much uncertainty. I recommend taking as much guessing out of the equation as possible. You might find that it doesn’t take as much of an increase as you might think. K-Value has kept me from making arbitrary increases that crush my athletes because it simply doesn’t take as much of a dramatic change as most coaches seem to think.

To wrap up this first section of Total Tonnage and Reps, I want all of you to realize that with these simple values you can measure the following important statistics:

I will explain all of these in detail during the video portion of this week’s education module from GymAware. It will make a lot more sense showing you how I track all of these versus trying to explain with words and possibly complicating something that isn’t really complicated. I will end this section by saying that these three variables have been absolute game-changers for my athletes.

This one goes without saying really. I talk about velocity every day of my life, so I assume that all of you understand the uses of tracking velocity. However, we all know by now the mistake that goes with assuming. By automatically tracking an athlete’s mean velocity for exercises, it ensures that the athlete’s workout is eliciting the adaptive response intended by the coach. Not to mention all the other uses for collecting mean velocity that I will briefly touch on. 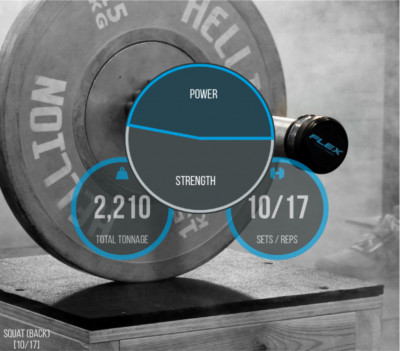 The following uses for velocity have been reported on several times by myself and other reputable authors for GymAware, so I just want to give a brief explanation of each in case you are new: 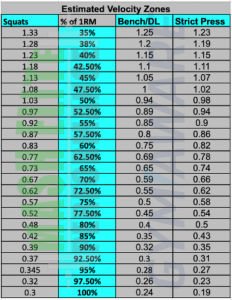 Power is a look at Force and Velocity, which share an inverse relationship. Athletes normally exist somewhere on this spectrum, which can be displayed with a X-Y Graph like below: 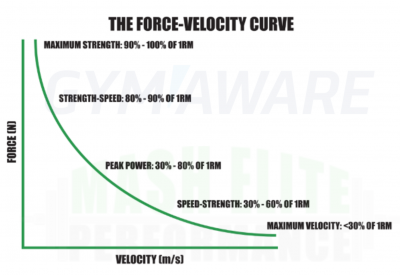 By tracking an athlete’s power, the athlete or his or her coach can keep track of any possible changes in their ability to produce power. For example, if an athlete back squats 180kg at 700W of Power in January and then 780W of Power in June, that athlete has established a trend towards becoming more powerful. By tracking power, an athlete can compete with their teammates for maximum power, which levels the playing field a bit. Plus, athletes and coaches will establish trends towards increased strength and the ability to express that strength with increased power. By monitoring movements like trap bar deadlift, hang clean, and power snatch, athletes can establish relationships between slower strength movements like a trap bar deadlift, powerful movements like a hang clean, and high velocity movements like power snatch. If an athlete gets stronger in the trap bar deadlift but the hang clean stays the same and power snatch goes down, the athlete has gotten slower and less powerful. Even in the sport of weightlifting, we monitor these movements closely to ensure we are encouraging strength increases that equate to more power expression.

This parameter is important to monitor for a few reasons. First, if an athlete is using higher loads in the back squat but distance is decreasing, that athlete isn’t necessarily getting stronger. They are cutting their squats high, and distance holds them accountable. Distance is important when it comes to overall work, since work is equal to force multiplied by displacement(distance). If work capacity is important, then one needs to monitor distance. Finally, I like our athletes to use distance to monitor their ability to produce power with lighter loads. An easy way to do this is to monitor an absolute between 15kg/33lb to 40kg/88lb in the barbell squat jump for height. The only key is to monitor the performance of the jumps. For example, is it a countermovement jump? If so, how low are the athletes squatting before the jump? I recommend using a box to keep things consistent. Normally, you will discover solid correlations between squat jump heights, vertical leaps, and improved sprint speeds.

Bar path isn’t really a data point, but it’s a solid look at the athlete’s improvement in overall movement. An improved bar path tells me a few things about an athlete:

Here’s why I love bar path as much or more than all the other parameters: when coaches like me teach other coaches about the benefits of particular movements like hang clean or back squat, those benefits are only present if the lift is performed as intended by the teacher. I see coaches bragging about their brand-new use of the clean on social media and throwing around power measures of 3,500+ watts that they learned about in the Level I certification. First, an awesome job taking ownership of your continued education, but you probably need to get with an experienced coach for a few months to ensure your ability to properly teach. To be clear, a lot of you are doing a great job and the rest of you are trying, which I applaud. The bar path tool is a great way to ensure that your athletes are indeed getting better.

I could go on forever about the GymAware FLEX. It was my first velocity-based training instrument. I fell in love with the FLEX and the app (Android and iOS), so I can get a little wordy. Remember, if you purchase the GymAware Cloud, the FLEX can be used just like the GymAware RS with all the awesome parameters that I talked about last week. Otherwise, you are going to love the FLEX just the way it is along with the simplicity of the FLEX App. One last thing, the FLEX App has a ‘Community’ and a ‘Workout Builder’ feature, so you can talk to other users and friends, see what they are up to, and even use their programs if given permission. The GymAware FLEX is an experience that will open you up to a safer and more effective world of strength training. I hope my words will help you along with that journey.

Watch the video presentation below: