Skip to content
Monitoring progress with velocity based training (VBT)

Introduction to tracking progress with VBT:

Monitoring or tracking progress in the weights room is essential and agreed upon universally by all Strength Coaches. Otherwise, we are simply assigning random workouts to our athletes and hoping for the best outcome. A Strength Coach carries the trust and reliance of athletes, Athletic Directors, Head Coaches, parents of the athletes, owners of organizations and various other stakeholders in terms of facilitating a positive result. A positive result isn’t beating athletes into the ground resulting in them lying in a puddle of their own sweat at the end of the workout…In this article, we will emphasise on how Strength Coaches can monitor progress using Velocity Based Training (VBT).

Continued learning is one of the key factors that directly impacts a coach’s ability to produce the desired response. Personally, I started the pursuit of my PhD in the year 2020. I was considered a top Strength Coach then, but I can assure that I am a completely different Coach just two years later. There are several approaches a Coach can take for continued learning. In association with GymAware, I am aiming to create free and digestible resources for Coaches to help transform their Coaching. We understand that most Coaches are busy, so those who prefer information through videos or short social media posts, follow GymAware on instagram and stay tuned.

Velocity based training (VBT) has countless applications, and I put each of those applications to work with all of my athletes. However, there is one application that helped me create the greatest improvement in all of American weightlifting. Last week at the Arnold Classic, the top ten men in USA Weightlifting battled on the main stage of the Columbus Convention Center. My athlete Ryan Grimsland snatched 138kg/304lb, clean and jerked an incredible 182kg/400lb, and totaled an enormous 320kg at a bodyweight of 73kg/160lb. That was a 23kg improvement on his total with all of his lifts being lifetime personal records. It wasn’t luck. It was a calculated process with one velocity application that I am going to share with all of you. 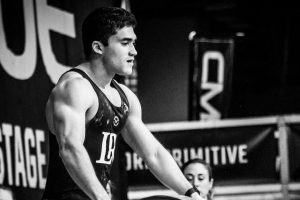 We use velocity to measure progress versus one-repetition maximums. We use GymAware, the Gold Standard of Velocity Based Training (vbt) or the Flex Stronger unit from GymAware to measure all of our athletes. To clarify, I have one GymAware unit that I use to measure my top athletes when precision is crucial. We use our Flex Units for everyone else, and they do a great job as well measuring within .009%. I’ve heard coaches debate progression measurements for years. Normally, it’s the old 1RM v/s 3RM. Whether you are pushing for a 1RM or 3RM, you are having your athletes lift to near maximum intensities, which is the number one pathway to injury. If you don’t believe that, then you have never been to a powerlifting or weightlifting world championship to witness bones break and tendons rupture. However, the only sport that is required to push squats, pulls, and pressed to 100%+ intensities is powerlifting.

So why do we see so many fail videos from football weight rooms or weightlifting training halls of squats gone badly? I am not saying that we shouldn’t improve leg strength or hip strength. By all means, I want the strongest lifters on earth. Ryan hit a new personal record front squat just three days prior to his competition with a 200kg/440lb lift. That was 10kg/22lb above his best ever, but was it a true 1RM? No way! Of course, I wasn’t going to allow him to max out three days prior to the first important qualifying competition of the 2024 Olympic quadrennial. We had a goal of working up to a 1RM at .4m/s, which is a typical 85% lift of Ryan and most of our athletes. His front squat of 200kg was performed with a velocity of .39m/s (measured by our Flex Stronger tool from GymAware), which ended his day just like everyone else on the team. I attribute the massive progression to the fact that he only front squats once per week, and it’s normally performed at an average of 75% intensity with a velocity of .5m/s or faster.

I had so many coaches asking me about my thought process. They simply couldn’t get past the fact that Ryan had lifted a new 1RM this close to the competition because most still don’t grasp VBT; despite the  hundreds of articles and videos explaining the various applications shared by myself and a few other Coaches. After the competition, I have never been approached as frequently ever in my life. If you are a weightlifting coach or strength and conditioning coach of athletes from any sport other than powerlifting, I recommend using velocity to track progress.

How to implement Velocity Based Training: 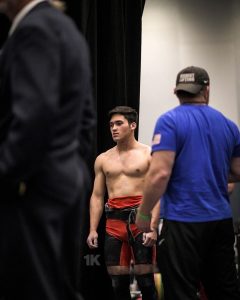 Lastly, I want to point out that velocity isn’t just for advanced athletes. Believing the opposite indicates one’s lack of understanding of VBT. Of all the athlete populations, I would say that high school age athletes should avoid true 1RM maximums if at all possible. Using one of the aforementioned velocity progressions would eliminate the risk of injury from athletes pushing past his or her capabilities. Like I said, there really isn’t a reason to max out anymore with velocity as an option. Some of you might be saying that RPE or RIR can do the same, but we all know those are subjective. If any of you have coached young men, then you know that most lack the ability to be honest with themselves. I was one of those boys. Heck, at 48-years-old I still am, which is why I use velocity with all of my training sessions. There’s a time and a place where science ends and the art of coaching begins. However, when it comes to progressing athletes, I am sticking with the objective measurement of velocity based training and my GymAware and FLEX devices.

Watch the video below: