Dr. Bryan Mann, , Phd, CSCS is the Assistant Director of Strength and Conditioning at the University of Missouri. He has been a strength and conditioning professional at the Division 1 level for the past 14 years. He originally created the general Velocity Zones based on the data he collected from Division 1 athletes.

Over the past several years, Velocity Based Training (VBT) has been coming to the forefront as an innovative way to determine load for strength training. Many people have developed novel approaches for the implementation of this technology. This has led to a “Wild West” of sorts for the nomenclature used to describe the diverse traits that are developed at the different velocities. We will attempt to sort this out to give a common nomenclature based off of the existing literature that has been produced on this topic.

Overall, the traits developed utilizing Velocity Based Training concentrically with average velocity can be categorised into different velocity zones.

In this article, mean velocities will be discussed. This is because mean velocities are more stable measures for most exercises (excluding the Olympic lifts and jumps) due to the large amount of time that is actually spent decelerating the bar (2).

Why Velocity Based Training?

Since you are reading this, you are probably already interested in utilizing Velocity Based Training with a measurement unit such as the GymAware. While there have long been % of 1RM zones used for making improvements in different traits such as strength and power, there are similar corresponding zones for making improvements in those same traits with velocities. If this sounds familiar, it may be because it is an adaptation of the original Bosco Strength Continuum as explained at the 2005 CSCCa National Conference (8).

While the percents are still valid, without measuring velocity, it is not possible to determine objectively if the weight is being moved at the appropriate load for that given day, as strength is quite variable from day to day. Also, since we have all spent plenty of time in the gym, we know that there are some days that you’ve got it and some days you don’t. Some days the weights feel light; some days they feel heavy.

This is essentially because our nervous system is never constant. In their review paper from the Australian Strength and Conditioning Association, Jovanovic and colleagues’ (7) used formulas by Jidovtseff (6) to estimate a daily 1RM through the load-velocity profile. They noted an approximately 18% difference above and below the previously tested 1RM, meaning that there is a 36% range around the previously tested 1RM.

For example, if you had 80% of the 1RM listed for that day, the actual relative load may be 98%, which would be way too heavy for that day, or it could be as light as 62%. This is why some days we feel strong in the weight room and some days we don’t. The absolute load is not the same relative intensity that we had pre-selected. We wanted the 80% based on the previously tested 1RM, but today that prescribed 80% is actually 98% of the individual’s capability for that day, so it’s way too heavy.

By utilizing Velocity Based Training, we can eliminate this issue.

For instance, if an individual moved 240lbs at .8m/s when they maxed out at 400lbs on the squat, which equates to 60% of 1RM. Now, after that person became stronger and had a max of 500lbs, the 240lbs would end up being moved much more quickly, more likely being around 1.0m/s. This is because the 240lbs is no longer 60% and instead it is now about 45%. Further, to move at .8m/s would require 300lbs. While the individual’s strength level changed and the weights used changed, but the corresponding % of 1RM did not.

Why does this even matter?

By understanding the corresponding velocity, or even more simply the trait that is to be developed, the proper load can be selected load for that given day. It does not matter what the % of the 1RM is supposed to be for that day, because by utilizing a prescribed velocity, the individual will automatically be at the appropriate load. Now, as we had previously mentioned, the velocities fit in line well with the original Bosco Strength Continuum. From lightest to heaviest, the continuum is as follows: 0-15 is neurological and untrainable, 15-40% is starting strength, 40-60% is non-quantifiable, 65-75% is accelerative strength, and 80-100% is absolute strength (8).

There has been some confusion in interpreting the non-quantifiable range. Some have thought that this meant that there was no trait that you could develop from those intensities, which is simply not the case. Instead, because it was difficult to differentiate between strength-speed and speed-strength, there wasn’t a definitive cutoff by % of 1RM and a great amount of overlap existed between the two and the term non-quantifiable was used. As we will discuss later, these two traits are in fact separate and can easily be discerned by velocity. A major advantage of Velocity Based Training is the discernibility of traits from the continuum.

Absolute strength is basically what it sounds like: the ability to exert force maximally and moving towards increasing the 1RM. There is some variation that exists between exercises when an athlete is achieving a 1RM which seems to be based on the amplitude of motion. According to Gonzalez-Badillo (3), the 1RM is approached at around .3m/s for the squat and around .15m/s with the bench press. From this bottom range, absolute strength is developed until around .5m/s.

The next velocity zone in the continuum is called accelerative strength. While this may create a mental picture of a runner moving down the track at increasing velocity, this is not the case. Bosco defined it as driving against a heavy load as fast as possible (8). It is more akin to trying to dominate a rugby scrum, or an opponent on the line in American football. These velocities are from around .5m/s to .75m/s.

The next two velocity zones, strength-speed and speed-strength, have been confused and misunderstood over the years. Bosco’s original continuum had them were merged in a non-quantifiable % of 1RM zone due to the overlap and variation between different people. More recently, multiple research teams, working independently, used velocity to separate the two zones.

Strength-speed , which is defined as moving a moderately heavy weight as fast as possible (i.e., moderate loads at moderate velocities) was found in to exist at .75-1.0m/s (4-6) (10). Multiple researchers each used a different word to explain the same thing but since the Roman text (10) was published the earliest, its terminology is followed.

Speed-strength is the next trait and includes velocities ranging from about 1.0 to 1.3 meters per second, depending on the amplitude of motion (4-6)(10). The Olympic lifts may have a much higher velocity as the bar has to move much farther. Speed-strength can be best defined as speed in conditions of strength, or speed being the first priority and strength being the second. In essence, it is utilizing lighter loads at very fast velocities.

The final trait is starting-strength, which is also a commonly misunderstood concept. Starting-strength is not developed with deadlifts, Anderson squats, bottom up, or bench press. These are actually building absolute strength in a solely concentric manner. According to Anatoliy Bondarchuk (1), starting-strength is the ability to rapidly overcome inertia from a dead stop. This means that it is an extremely high velocity with very light weights. Starting-strength is trained when the bar is moved from 1.3 to approximately 1.6 m/s, again dependent upon amplitude of motion (1). 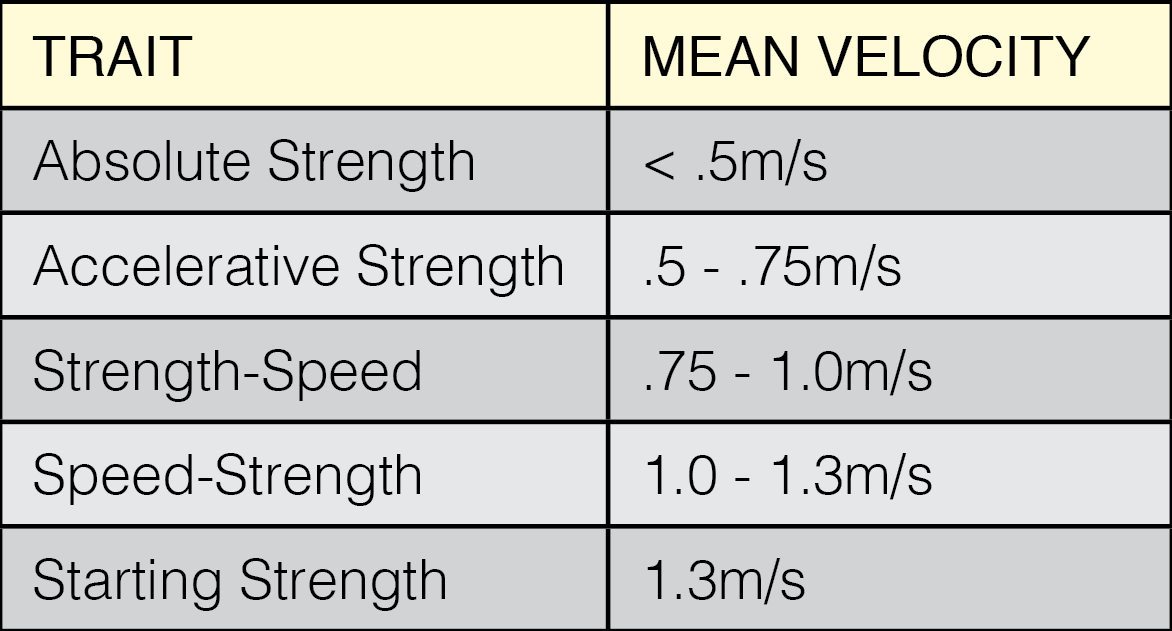 One thing that is quite interesting to me is that the use of the traits by velocity fit seamlessly with Bosco’s Strength Continuum zones that were set all of those years ago. The use of velocity will aid in the selection of training load because the 1RM is so variable and the velocity relationship to % of 1RM is stable.

These numbers are only guidelines. Some individuals may be moving a bit slower or faster than this, and that’s ok; we are looking for the average. For instance, I was collecting data on a football player, and his maximal squat was .19m/s but, we read in previous studies that an athlete is typically moving the bar at .3m/s on maximal squat attempts. Regardless of any guidelines and rules that are determined, there will always be outliers and exceptions to the rule. The key is to realize who the exceptions are and why they are occurring and not to disregard the rules.

Specificity is key to training.

You must be moving the appropriate load at the appropriate velocity to develop the desired trait (9).
The use of devices such as the GymAware not only give you crucial feedback, they are the way to ensure that you are training the appropriate traits and will thus see the desired outcomes of training. Additionally, the GymAware will capture and collect all of the data for you. As a function of the reports, the GymAware can also give you a predicted 1RM for any given day. With this already done and accounted for, it enables you to examine trends in the loads lifted at the various velocity zones over time to assess progress. Some people get lucky and get the results they desire, I’d always rather be right than lucky.

For more information on Velocity Based Training, checkout this YouTube video

7. . Rearched Applications of Velocity Based Strength Training. Journal of Australian Strength and Conditioning 21: 11, 2014.

10. Roman RA. The Training of the Weightlifter. Moscow: Sportivny Press, 1986. 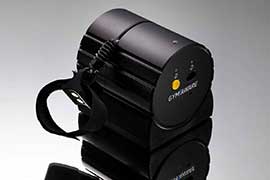